Hollison is a small company — 12 employees — tucked away on Warehouse Road in northwestern Owensboro.

The company’s Protect For Pets — a probiotic supplement for dogs and cats — is now available or soon will be across North America in such places as Walmart, Menards and Amazon.

And Hollison is working to get in the European market as well.

Christopher Thorn, vice president of brand management, says the company is producing 1,000 bottles a month of the supplement now and expects that to increase to 2,000 by this time next year.

The product is sprinkled on pet food like salt.

“If you’ve ever tried to give a cat or a dog a pill, you know that’s hard to do,” Thorn said. “This has no odor, so pets don’t turn away from it. My cat uses it and it helps with hairballs and coughing.”

Kevin Humphrey, the company’s chief executive officer, said Hollison also sells the product to pet food companies that put it onto their products in the factory.

Kibbles ‘n Bits is one of those companies.

Hollison has also developed a product in its Protect brand for humans.

That should be launched soon, Humphrey said.

He said he’s had “early stage” calls from larger companies about buying the product line.

But Humphrey said, “We want to anchor it to Owensboro.”

She said probiotics also have environmental and industrial uses as well.

“I struggled for years to find a way to make this work,” he said earlier. “It took finding the right people to make it work. Right people, right time, right place.”

He and his brother, David, opened Agri-Tech in Livermore in 1996, specializing in grain-handling equipment, poultry house construction, electrical work and steel building construction.

When that business closed in 2005, Humphrey started working on Hollison — a combination of the names of his daughters, Holley and Ellison.

Probiotics are live bacteria and yeasts that are good for digestive health.

And they have become popular in the 21st century. 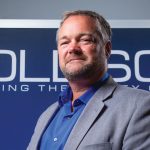