Years ago Hollison Technologies CEO Kevin Humphrey had a vision of protecting people’s food supply from harmful pathogens. So he built a food sampler in his garage and invented a process that was the world’s first sampling system for food manufacturers to get a thorough sample when testing for contamination in dry food products.

Major manufacturers who produce grain or dry food product can use Hollison’s process to test for Salmonella and other contaminants.

Now they are looking forward to the future with their newest product line—Protect for Pets, a probiotic-based supplements for pets.

“The team at Hollison is very innovative and we are developing new probiotics products for both humans and pets,” Humphrey said.

He said process automation has become a big part of what they do locally.

“Our team in the systems integration group is continually enhancing our robotics and automated inspection services,” he said. “Hollison now provides design, sourcing, installation and service for robotics and other systems automation.”

Humphrey said they want to be a part of the success Owensboro and Daviess County are primed to see over the next several years.

“Everything is about people and Daviess County has great people—from the workforce to local government,” he said. “Hollison is an innovator in the probiotic field, and that is because of the people who work here.”

Humphrey said there are high-character, skilled people in Owensboro and Daviess County who want to be part of a success story.

“All great companies start with great people, so if I’m asked by a prospective new company ‘why Owensboro and Daviess County, Ky.,’ my first response will be the people,” he said. 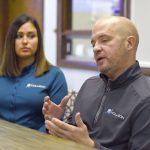